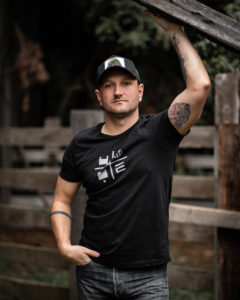 Dustin Saylor is a Northern California home grown American Country Singer Songwriter. Saylor is The #1 Country/ Folk Artist In San Francisco Bay. In 2021 Dustin Saylor was a featured up & coming artist on 93.7 The Bull where they played his newest single “Simple Life.” In 2019 Saylor landed a spot at the largest Country Music festival north of San Francisco, Country Summer. Saylor has performed with such artist as Tyler Rich, Drake White, Needtobreath, Chase Rice, Plain White T’s & Daughtry. His sound has been compared to Thomas Rhett, Chris Stapleton, Chase Rice and Tyler Childers.

American Country singer/songwriter, Dustin Saylor grew up in a small town in Northern California. His calling to music began sitting at a piano in 4th grade. By the time high school rolled around, he was handed a guitar and told that he was going to be leading the music for his high school youth group. He continued to sing at his local church every weekend. Since learning his first chords on a guitar, Saylor has been a passionate songwriter, writing about life, relationships and his “all in” journey..

Saylor was married with a son at the age of 23 while working for a furniture delivery company. But the calling of music was pulling at his heart. He knew that he would tell his own son to pursue his dreams, and realized he needed to lead by example. Not long after his son was born, his marriage fell apart and this began his journey of personal development. He decided to go back to college to get his music degree from Sonoma State University. While in college, Saylor bartended and started playing local clubs and bars.

In 2009 he tried out for American Idol. Walking away without a Golden Ticket was devastating and Saylor started questioning if he was good enough and why he was even pursuing music in the first place. As he made the 7 hour solo drive back home, he experienced that self loathing period that eventually transitioned with the miles. While listening to the Cold Play Viva La Vida album, he asked himself, “Why has Cold Play made such an impact?” The answer boomed in his head, “Because they are all in. They are fully committed to their music.”

He recognized that he hadn’t fully committed to his path in music yet. During this realization Saylor felt the great spirit ask Him an important question, “Do you trust the abilities I’ve given you? Do you trust that I will always provide for you?” In that moment Saylor answered a bold “Yes!”

Saylor returned home, quit bartending and started gigging full time all over the Bay Area. When Saylor graduated SSU in 2011 he was the only full-time working musician in the college and was well on his path of pursuing a music career.

Saylor’s journey on the musical path has been one of trust: trusting that God will provide; work; and direction. Saylor’s love for music is rooted in the ‘knowing’ that music will always be there for him to express his feelings.

When it comes to songwriting, Saylor draws from his childhood experience when he was adopted at 6 years old into the Saylor family. The first six years of his life were full of a contrast of deep darkness and bright saving light. It is from those experiences that Saylor writes his songs. Saylor’s motivation to write and perform songs comes from a place of wanting to connect, to inspire, to lift up and break down walls. Saylor is driven to provide a space through his music that allows people to let go of all labels, to give freedom to just be human and share that human experience without having to box it in. His music is meant to heal, to bring joy, to elicit laughter and just plain have a good time.

Today, it is safe to say that Saylor is “ All In” and will never stop singing and playing music until his dying breath.